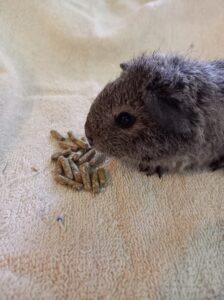 When Karen Higgie offered to look after her grandchildren’s two pet guinea pigs, she had no idea it would lead to breeding and showing the tiny animals.

Karen and her husband used to breed and show Shetland dogs, but as she got older, she found the dogs were harder to groom and care for, so they gave it away.

“My daughter got two guinea pigs for her children, but then then got a Husky dog and he thought the pigs were fun to play with, so good old nana said she would have them, and the kids could come and visit.”

Those two guinea pigs were Dash (a boar) and Star (a sow). Little did they know that Dash had had his way with Star, and she was pregnant. That was the start of it all, and now Karen has about 34 guinea pigs.

Karen breeds the pigs to show, and is secretary of the Mana Cavy Club, which she joined in 2019.

She had been feeding her guinea pigs a diet of grass, hay and fresh vegetables, and it was through showing that she learned about the importance of pellets.

“Being at the shows I discovered they were fed more of a rabbit pellet and that’s when I found Sharpes pellets.”

Karen has been feeding her guinea pigs Sharpes for about six years and she says the pigs love Sharpes. “I’ve tried many pellets over the years, but still come back to Sharpes every time,” she says.

“All my babies are reared on Sharpes. I like that there are no dyes in it, the only downside is because it’s a rabbit pellet it doesn’t contain Vitamin C, which is very important for guinea pigs, so I give them vegetables to make up for that.”

Her show guinea pigs are fed a mixture of Hygain Showtorque, which has the protein to build muscle, and Sharpes rabbit pellets, which she says is great for bulk and filling the animals up.

Karen buys 10-20kg of Sharpes pellets a fortnight from Farmlands in Otaki and says it is the best they will eat.

“They need a good quality pellet and I’ve found Sharpes to be the best quality, and then I just add the Vitamin C.”

“They popcorn, which is when they bounce, like kangaroos, on all four legs. They make an awesome pet for kids, though they do take a lot of work, and are an amazing little animal.

“For myself, and a lot of people, I get great satisfaction from watching them eat – they eat really quickly and are quite dainty and will try to hold their food. They’re quite the characters.”