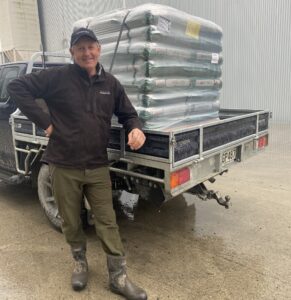 While Dean can’t quantify the gains in numbers, he believes the bulls fed nuts have an edge on their grass-fed counterparts when it comes to velvet growth.

Dean runs a small scale deer farm and Wapiti stud operation on about 40 hectares near Masterton.

Adult male Wapiti can grow up to 500kg, making them the biggest species of farmed deer in New Zealand. By putting the ‘big boys’, the Wapiti bulls, over his red hinds the result is a hybrid fast growing fawn for the venison market. “Our schedule is peaking in spring, ideally you want to get your animals killed at 45-80kg carcase weight, and you can do that in the first year with this cross.”

In the commercial herd, all animals are grazed for venison, while the best bulls are kept and sold to other farmers as sires. Velvet is another valuable by-product and the main reason for Dean’s move to nuts is to get his velvet competition bulls in tip top shape for the annual velvet competitions.

“We’re trying to feed them as best we can. The idea behind the nuts is it really helps the velvet grow quite quickly. I would hazard a guess they put on an extra 1kg of velvet, as opposed to pasture-fed deer.”

Dean buys his bulls from Southland, where they grow incredible velvet weights. On asking a local farmer and vet what the secret was, he learned about nuts and approached Sharpes to see if it was possible to create a similar brew for his deer.

The resulting product was the Sharpes deer velvet nuts, and Dean has targeted his competition animals with the nuts for several years now, to maximise their ability to grow velvet.

The bulls get on to the nuts quickly, within two or three days, and the nuts are fed in troughs.

He doesn’t yet use the nuts in the commercial herd, but there could be future opportunities to utilise nuts there to increase velvet volumes and, consequently, price. “Another 1kg of velvet is another $100 per animal, so it’s certainly worth it.”