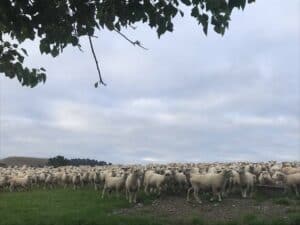 Supplementary feeding ewes Sharpes Multifeed nuts at tupping is standard policy at Mason Topp’s Hinakura sheep and beef farm in the Wairarapa. Benefits include boosting conception rates and body condition score of ewes, as well as providing flexibility if feed gets tight.

Mason owns 930 hectares and leases a further 130ha in the Hinakura/Longbush area, running a breeding and finishing operation with Romney breeding ewes, as well as breeding cattle.

“We mate just over 3000 ewes. We don’t mate hoggets or yearling cattle. It’s a traditional farming system. Cattle are mated as two-year-olds and calved down as three-year-olds.”

The property is described as summer dry hill country with contour a mix of about 20% flat and the balance medium to steeper hill country.

Mason has been feeding Multifeed to his ewes annually for about five years and, although he doesn’t weigh or measure things, his belief is that it makes a big difference.

“In dry years we don’t mate until April to match our feed growth and, by then, we’re well and truly into autumn. In dry years, that can be the time sheep really go off the boil and not be up to good conception rates.

“The nuts enhance conception. Out of 3000 ewes we can mark 4500 lambs. In my operation, with traditional Romney sheep, that’s enough to me, on hill country farming.”

Mason also owns a farm in Australia, where he has learned a lot about supplementary feeding. “We feed almost every year when we put the ram out. Over there, there’s nothing, it’s as close as you’ll get to Central Otago and we’re really reliant on feeding something with the nutrition to make them ovulate.”

Using a ration specially formulated by a nutritionist does come at a significant cost to the operation, but the conception rate is relative to the amount of protein an animal is eating, and Mason says the scanning results tell the story.

“The scanning will tell you if you’re in the money or not. In a dry year it would be easy to be back 10-15% on scanning.

“If there’s one thing I’ve learned about farming it’s that if you can afford to stay in the game, it’s one of the best things to do. If your ewes are in good order, even the ones that don’t conceive, that’s extra money on them. All those incremental things add up. Light sheep after a tough year, the knock-on effect, it’s hard to put a dollar term on that.”

Mason feeds out with a lead in time to mating of a minimum of two to three weeks. If it’s a dry season the lead in time would be longer. He buys 1000kg bulk bags and feeds out using a tow behind buggy. He feeds about 200-250 grams per day per sheep.

“Depending on the season we might only do it for a month, two weeks either side of mating, and hopefully that will get you by because there’s still a cost attached to it.”

The benefits he sees are higher conception rates, better body condition score on sheep and to provide an insurance policy in tough years.

“Just the mere fact that, in a tough year, you don’t feel vulnerable or have to reduce stock numbers too much to the point you can’t recapture it when the grass starts to grow again. It adds flexibility to your farming policy.”

An added bonus of feeding annually is it eliminates the transition period to get sheep on to the feed. “We don’t have the transition phase. We’ve learned in Australia that imprint feeding pays dividends. Training lambs to eat nuts while on mum is the quickest way.”

Mason has had a long relationship with Sharpes and values the service he gets.

“I get very good service from them, no doubt about that. They are extremely accommodating, even during Covid when they have been under the pump, they definitely remember the local people.

“I’ve known the family for years. Alastair has always been an innovative and hard-working guy and they’ve always known the product is only as good as you make it – they pride themselves on putting it together correctly. I feel confident in the quality of the product. It’s a family-owned business and they know it’s prudent to keep the integrity right. Alastair is genuinely interested in farming and what you’re doing, he makes sure you’re taken care of.”